The Baltic Sea Challenge (BSC) is an international network of organisations committed to Baltic Sea protection and implementing water protection activities. The common vision of the network is to achieve a clean, productive and shared Baltic Sea.

The water protection activities of the network members are grouped under five objectives:

The strength of the network is in its members

Members join together within the network to share best practices, organise events and produce materials aimed at protecting the waters of the Baltic Sea region. Joint projects with external funding have also been launched within the network.

The Baltic Sea Challenge network provides a range of benefits for its members: the expertise of the other network members, support and a framework for creating concrete water protection measures and a strong communications channel.

The network is an informal, easy and direct cooperation tool for water protection. It enables members to learn new practices and builds bridges between different organisations and operational models – private and public, large and small, local and national.

Network membership is free of charge. Core funding for the network is allocated by the cities of Turku and Helsinki in Finland.

From bilateral dialogue to network conversation

The Baltic Sea Challenge initiative for the protection of the sea was launched in 2007 by the mayors of the Finnish cities of Helsinki and Turku. These cities consider the state of their local waters and the Baltic Sea to form the basis of their competitiveness and have published a joint Baltic Sea Action Plan with around 40 activities that exceed the basic legal requirements in place. They have also challenged other organisations to join them in this task.

In just the first year, over 100 organisations have joined the network – evidence of the pressing need to develop networking in order to enhance Baltic Sea protection work among organisations of different kinds. In the early mobilisation phase, collective network development was supported by the proactive measures and personal contacts of the mayors. The BSC network was founded by two cities that launched their joint action plan in full mutual cooperation – this helped to build trust within other organisations and demonstrated the openness and non-centralised nature of this particular network.

Helsinki and Turku updated their joint Baltic Sea Action Plan for 2014–2018 with 75 water protection activities and set out a new operating model including five priorities for the Baltic Sea Challenge network.

Networking and meeting face to face is an important part of the Baltic Sea Challenge activities. 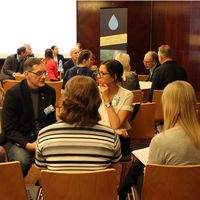 Networking opportunities is an important part of what the Baltic Sea Challenge offers the partners of the network. It gives experts an opportunity to meet face to face, which is still, despite new possibilities of online interaction, the most effective way of learning and contact making.

Since the BSC network was established in 2007, numerous events have been held around the Baltic Sea region. For example, in 2014 and 2015 two big networking events were organised in Helsinki and Tallinn. The “Cities Forum” in Helsinki 2014 was arranged back to back with the official opening of the Gulf of Finland Year 2014 and focused on what cities can do, giving tools for water protection. It applied a cost-benefit perspective on four themes: storm waters, waste water reception in ports, food, and waste water treatment plants.

The “Baltic Sea Forum” in Tallinn 2015 was a whole day seminar arranged as part of the Estonian Municipality days, and there were participants from all around the Baltic Sea region. On the agenda were challenges in municipal water protection work, and tools were brought up including an environmental communication strategy for the three Baltic States; a cost-benefit perspective on water protection, and networking. Several Baltic Sea Challenge partners also had the opportunity to present their actions, and along the day participants took part in lively discussions and group work.

Both networking events were organized by the Life+ financed CITYWATER project in collaboration with the Baltic Sea Challenge network.

The Baltic Sea Challenge also participates in events organised by other organisations. In addition to the international work, the network is working actively in Finland where it was established.

The Cities Forum and Baltic Sea Forum are examples of Baltic Sea Challenge events that bring together a variety of actors including municipalities and cities, organizations and associations, ministries, waste water companies, foundations, international organizations and universities. The events connect experts – the ones actually doing grass root work, presenting their experience to their corresponding colleagues, in order to bring about change and new ideas in working procedures and established practices. In addition to this, the events have brought together both big and small organizations as well as actors from the coast and from inland.

Taken together, experiences from the past years have shown that the Baltic Sea Challenge provides an excellent platform for cooperation, networking, exchange of ideas and working models.

The Baltic Sea Challenge network was established in 2007 by the mayors of the Cities of Helsinki and Turku. Since then, the network has organized numerous events in the Baltic Sea region. Partly resulting from these events there have been several projects under the umbrella of the network, for example Cities for a healthier sea (2010-2012, EU Central Baltic Interreg financed), CITYWATER (2012-2015, EU Life+ financed) and Östersjöutmaningen möter Sverige (2014-2015, financed by Ålandsbanken and the City of Turku).

How to join the Baltic Sea Challenge?

How can we create an action plan?

How can we update our commitment?

Read instructions and download the commitment form to be filled in here.

How can we share an action to be included in the Bank of Actions?

Fill in the electronic form here.

For further information, you are most welcome to visit the Baltic Sea Challenge web site!

Laine, K. 2015. Development plan of nature centre concept in Yyteri, Pori. Benefiting the Baltic Sea Challenge by a registered trademark. Satakunta University of Applied Sciences, Degree Programme in Innovative Business Services.
The purpose of the thesis was to find out by the means of a framework/ development plan, how municipalities and companies could find a way to protect the Baltic Sea together. The objective is to improve the state of the Baltic Sea through the cooperation of municipalities and companies. The key concepts of this thesis are the Baltic Sea, sustainable tourism and water protection.
Link to the thesis

Ritvala, T. & Salmi, A. 2009. Networking around a common issue - From words to action in the case of clean Baltic Sea. Helsinki School of Economics, International Business.
The paper investigates the early emergence of (collective) action around a common issue, i.e. the poor condition of the Baltic sea. The role of network mobilizers in promoting the issue and its solutions is considered, as well as the mobilization mechanisms that the key players are using. How can an actively and widely presented interest in the issue by very different types of actors be turned into concrete actions?
Link to the article

Ruokanen, L. & Lauttamäki, S.-M.. 2014. Baltic Sea Challenge - Networking and experience exchange enhancing the implementation of concrete water protection measures. Linnaeus ECO-TECH` 14, Kalmar, Sweden, November 24-26, 2014.
This article describes briefly the environmental problems of the Baltic Sea, local organizations’ role in tackling these problems and networking as an instrument to enhance local level implementation with the BSC as an example. The most important part is the compilation of evaluations on how the BSC network has succeeded in network mobilization, creating intrinsic trust among the members, how the BSC has succeeded in supporting its member organizations in water protection activities, and progress in the coordinating cities’ internal operations and the strategic level of considering water protection as a competitiveness issue.
Link to the article