Sewage reception at port without a special fee

The Port of Helsinki receives sewage water from international passenger cruisers with no special fee and delivers sewage to the local municipal Viikinmäki WWTP for treatment. A cost-benefit analysis of the practice was conducted in 2015 during the CITYWATER project. 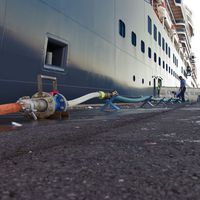 The Port of Helsinki, the main passenger port of Finland, receives wastewater from passenger ships and the wastewater is treated in the municipal WWTP in Helsinki. The Port of Helsinki applies a no special fee system by charging only a general waste fee on solid an oily waste, which depends on the size of the ship. The visiting ship pays the same waste fee whether discharging the sewage in the harbour or not. For receiving the sewage from vessels, the Port of Helsinki has invested in port reception facilities (PRF) from 1990 and the expansion of the sewer system is continuing together with the construction of new quays. The no special fee policy was launched in May 2008 in connection with the Baltic Sea Challenge. Already next year the amount of sewage discharged to the sewer system increased c. 20%. In 2015 over 80% of the international cruising ships discharged sewage during their visit in Port of Helsinki. The vessels in regular route traffic have dicharged their sewage to municipal WWTP already since the 1990s.

During the cruising season in 2016 the Port applied a new incentive to international cruisers: 20% discount to the geberal waste fee (solid and oily waste) if the ship discharges also sewage. In addition to this, a waste adviser visited each visiting cruiser. This resulted in 10% increase compared to 2015; 90% of the visiting international cruisers discharged their sewage during the season 2016.

The Baltic Sea is defined as a special area since 2013 which means that when the port reception capacity in the ports of the Baltic Sea becomes sufficient, dumping of sewage waters to the sea will be prohibited. The Port of Helsinki has already fulfilled this aim. According to the Port, another reason for implementing this measure, in addition to legislative demands, is the benefit of an improved image. The high-level social responsibility and the location are clear benefits for competitiveness. 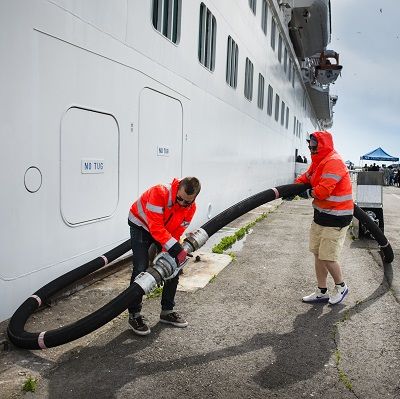 The estimated nutrient reduction loads to the Baltic Sea are 21,000 kg of nitrogen and 3,000 kg of phosphorus annually. Depending on the future scenario of the Baltic Sea state, these amounts provide 0.3–3.6 M€ annual benefits. Compared with the overall costs of investment, the long-term (40 years lifespan) net benefits would be between –7.5 M€ and 76.2 M€.

The quantitative results should be interpreted in caution, since many assumptions had to be made in the counting of costs and benefits and data was partly lacking. However, the study provided good lessons learned. The main costs occurred from investing the sewerage system and the waste water treatment costs. Port of Helsinki have installed PRF systems in both existing and new quays with the experience that installation in new quays is more cost-efficient. Cost-efficiency of the investment increase also if the port is located near to municipal WWTP that is sufficiently big to receive the shipping sewage - as is the case in Helsinki. Investments to the PRF system is recommendable because the treatment in one onshore plant is likely more efficient than on the vessels.