City of Turku conducted a plan for storm water wetland to be implemented in future simultaneously to the construction of infrastructure in the new residential area. 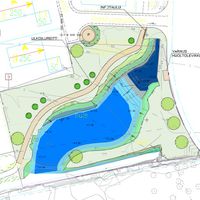 Lake Illoistenjärvi is situated in the centre of Hirvensalo Island near centre of Turku. The lake is small and suffers from eutrophication. The land use in the catchment area is ongoing big changes as the fields and forest are turned in to residential areas. This increases the amount of storm water being formed in the area. It also increases the amount of sediments, nutrients and harmful substances ending up in the lake, especially during the construction phase.

Building a wetland into the Peippolanoja ditch leading to the lake helps to keep the lake’s water quality from declining. Plans for the wetland were drawn 2015. According to the current plans the wetland will be implemented simultaneously to the construction of infrastructure in the area.

All measures are voluntary and aim at improving the state of Lake Illoistenjärvi and the Baltic Sea. The plans were made as a part of CITYWATER project.