Campaigning for sustainable water use

AS Tallinna Vesi (producer of drinking water and treatment of wastewater in Tallinn) works extensively with increasing environmental awareness in order to support conscious and sustainable use of water. 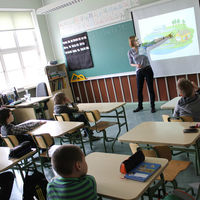 AS Tallinna Vesi carries out several actions to improve people’s environmental awareness on tap water quality, clean water, and sustainable use of water. Better awareness helps people to be more conscious consumers. A comprehensive list of activities involves outdoor media campaigns, actions for engagement, open door days and ongoing excursions through the year at the treatment plants to introduce the work and quality of the service. To raise more conscious youth, the employees attend school classes and visit kindergartens, where they discuss about the water cycle, consumption and quality. The company engages people through several actions, projects and co-operations:

Besides its main responsibilities – production of drinking water and treatment of wastewater – the treatment plants also have an important role to play in increasing the population’s awareness. Each year AS Tallinna Vesi introduces the plants’ work to a growing number of people. In 2015, more than 3,000 visitors participated in guided tours in the treatment plants.

Over the years, the company has prepared many educational study materials on water and environment for children and teachers. These include, for example, a study material series “Blue Classroom” for the teachers in nature studies supporting the national study program in classes about water. The games and puzzle book for kindergartens and primary schools got new great sequels in 2015: Tilgu’s playing cards and a puzzle book „Puzzle with Tilgu“. To introduce the water-related study materials to kindergarten and school teachers an information day was organized in August 2015 with nearly 100 teachers participating from all over Estonia.

In the beginning of 2016, the company entered into co-operation with Healthy Estonia Association to increase tap water awareness. Joint campaign with Healthy Estonia, Ministry of Social Affairs and Norway Grants aimed to attract youth with a message “Tap water makes you beautiful. Smoking and drinking make you ugly”.

AS Tallinna Vesi keeps on working hard to promote the environmental thinking amongst the Estonian population. In its messages and activities, it encourages them to drink tap water. With message “Tap water IS drinking water”, it draws people’s attention to the excellent quality of tap water. It has also continued co-operation with restaurants within campaign “Ask for tap water” so that the customers would have the courage and awareness to ask for tap water when they dine in restaurants. The company also organized a live action in the Tallinn old town and set up a public water tap at Tallinn Airport. While only few years ago, in 2011, 48% of people trusted to drink tap water, the number of people trusting tap water quality had grown to 86% by the end of 2015. 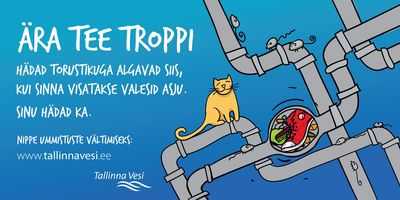 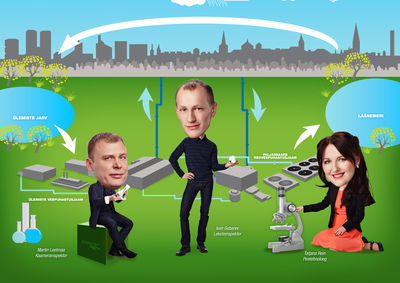 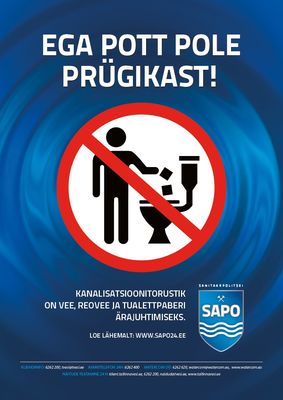 People that are more aware make better decisions as consumers. By understanding the water cycle and becoming more conscious about what happens to the consumed water, people do make decisions based on the understanding of their impact on natural habitat including the Baltic Sea.

Knowledgeable society can be key in reducing the environmental load on the Baltic Sea.

AS Tallinna Vesi's campaigns and activities serve to raise the awareness about the water cycle in terms of where does the clean water come from and where does the wastewater go. By enhancing environmental consciousness and responsibility of the people, we encourage society to think about the origin of drinking water and to use the water sustainably.

AS Tallinna Vesi is the largest water utility in Estonia, influencing the lives of nearly 1/3 of the population and in addition, all people living next to the Baltic Sea. The company understands the impact of its business on the surrounding natural habitat and therefore deems it important that its activities engage with the interests of the community. AS Tallinna Vesi gives its best to do more than is required and expected in order to make a positive impact on the natural environment around, as well as the quality of people’s life. Although the company is not obligated to contribute to increasing people’s awareness, it finds it important to do so, as better awareness increases the sense of responsibility to make more conscious decisions, thereby having a long term positive effect on, amongst others, the well-being of the Baltic Sea.