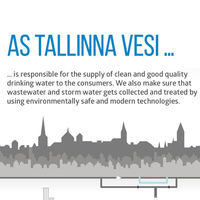 AS Tallinna Vesi (producer of drinking water and treatment of wastewater in Tallinn) has installed a new automatized coagulation system in their wastewater treatment plant in 2015. The new system has sensors, which detect the concentration of phosphates after the wastewater leaves the aeration tanks and before it enters the secondary sedimentation tank. According to the results of the sensors and the flow rate, the dosing pump then releases a quantity of coagulant, which is efficient to meet the target concentration value of total phosphorous (Ptot).

The new system enables optimization of the dosage of the coagulant as the automatized system measures the concentration of phosphates after aeration tanks and responds by releasing sufficient amount of coagulant in order to meet the target vaue of Ptot.

The system enables AS Tallinna Vesi to detect sudden changes in the concentrations of Ptot in the wastewater on an ongoing basis. This is beneficial as it enables them to detect any unknown and unexpected pollution or a potential failure in one of the processes preceding coagulation. Thus, it is possible evaluate if there is a need to intensify the treatment processes before and / or after coagulation.

The requirement for the concentration of Ptot in Estonia is 0,5 mg/l. Preceding the implementation of the new automatized coagulation system, the legally required Ptot concentration in the outflow was also being met by AS Tallinna Vesi. Yet, the system was implemented in order to increase the control over the wastewater treatment processes, which have a direct impact on the Baltic Sea.