Theme year of streams and brooks

The City of Vantaa designated 2015 as the Year of Streams and Brooks. 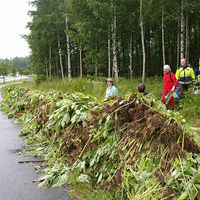 During the theme year voluntary work for stream restauration was organised, e.g. gravel beds for spawning were built for trouts and harmfur invasive plant species Impatiens glandulifera was uprooted from riverbanks. The city organised nature trips and during autumn special trips for observing spawning trouts.

Awareness raising by organising nature trips to streams and brooks helps inhabitants to understand the value of these waters and increases their respect for stream nature. The uprooting of Impatiens glandulifera has been fery effective; their growth has been curbed and the indigenous plant species have been able to spread back to their old habitats. Local people have also been inspired to do uprooting of this invasive species themselves. The gravel beds enhance trout spawning possibilities in the streams and brokos of Vantaa. Also the uprooting of Impatiens glandulifera helps trouts, as there is less erosion of the banks after the deep-rooted and perennial indigenous plant species psread back to the stream banks.

The theme year of streams and brooks was totally voluntary action. The idea was brought up by the Finnish association for fishing tourism (SKES) and the City of Vantaa working group of migratory fish.