In 2008 at the Mansion of Ruissalo the City of Turku shifted to organic farming. 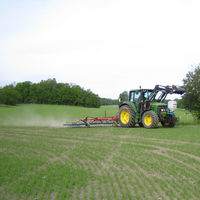 In the area the city grows wheat, rye and oat. A crop rotation method is used on the farm which means three years of growing grain and two years of growing clover. At the same time the farm omitted the use of pesticides and fertilizers. The contract for growing crops is in force five years at a time.

Clover binds nitrogen in itself. When it is crushed it naturally fertilises the soil for the future grain growing.

The action is completely voluntary. Hopefully the case is seen as an example for other farmers of the area.