Turku Region Nature Photographers Association together with Turun Sanomat newspaper executed ”The Baltic sea, Our sea” photography competition 18 March – 30 September 2008. Partners in the co-operation were the Nature Conservation District of Southwest Finland (Varsinais-Suomen Luonnonsuojelupiiri ry) and the Rajala Pro Shop. Own webpages were opened for the competition and it operated fully on the internet where it was possible for the public to evaluate the photos. The photos got more than 77 000 reviews. On the whole there were 440 photographers that participated in the competition with 2608 pictures. 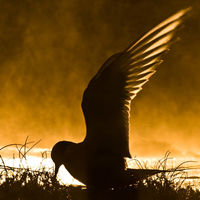 The results of the competition were published on 11 November 2008 in the Rajala’s Evening of the nature photography (Rajalan luontokuvailta) in which almost 1000 friends of the Baltic Sea participated. All the pictures of the competition were on view at the window gallery of Pulssi Medical Center in Turku in December 2008. The best 20 photos of the competition were also compiled into Baltic Sea, Our sea photograph exhibition, which was on view in several different locations during 2009-2010. The Baltic Sea, Our sea calendar was made of these pictures by Turun Sanomat newspaper and the profit made by selling the calendar donated to the Protection Fund for the Archipelago Sea.

Increasing awareness about the Baltic Sea.